About the Boston Shamrocks

The Boston Shamrocks is a USA Hockey registered U19/Canadian Intermediate AA team which plays in the Junior Women’s Hockey League (JWHL) on college campuses against some of the best teams in North America. The Shamrocks will also play in some of the top tournaments in the United States and Canada guaranteeing outstanding competition and maximum exposure to college and National team coaches.  Past tournaments have included Chowder Cup, NAHA Labor Day, Stoney Creek, and the JWHL Challenge Cup.

The Boston Shamrocks have a consistent schedule of late afternoon practices, four days a week plus addidional optional skates. Along with the on ice practices, the team also utilizes classroom and video sessions to ensure a thorough understanding of positional and team tactics and the development of the “complete player.”

The Boston Shamrocks players have access to ice at the team’s home rink, Ristuccia Arena, during the day. This allows Shamrocks players to work on specific skating, shooting, stick handling, and goaltending techniques, or affords them time to be creative, or just have some extra fun.

Advanced development requires more than ice time. For strength and conditioning the team members have full access to the Boston Bruins former weight room, including a sauna and outdoor track. 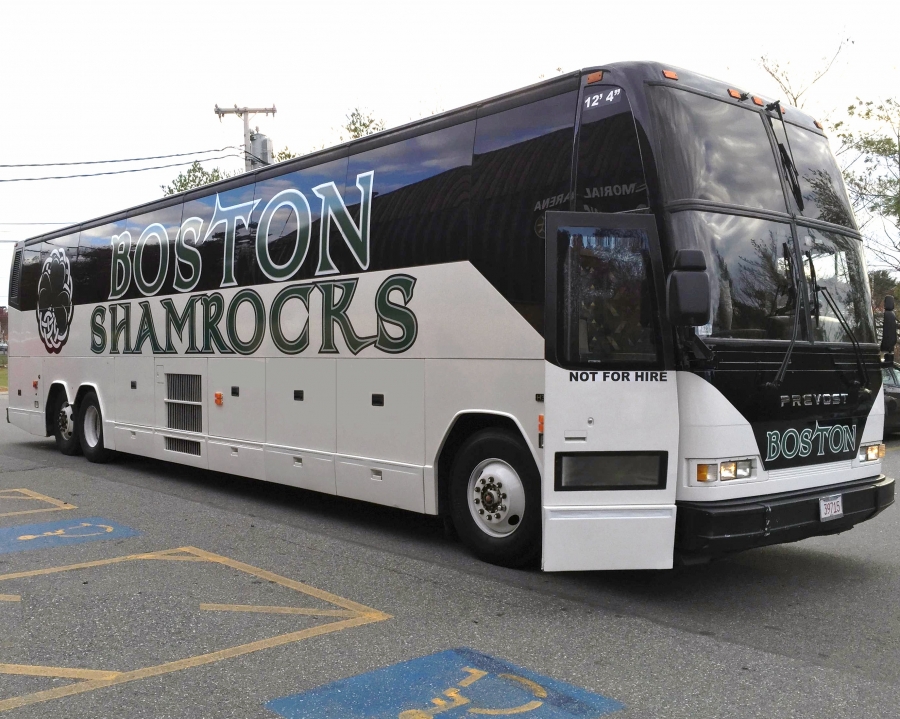 All home games and practices are held at Ristuccia Arena, the NHL Boston Bruins’ former Practice and Training facility in Wilmington, Massachusetts. The Shamrocks have their own dedicated locker room, with individual stalls for each player. The arena features study areas, a players’ lounge with big screen tv, as well as a full service pro shop, with state of the art skate sharpening and profiling equipment.

The Boston Shamrocks provide home and away jerseys and socks, helmet, as well as gloves, shells, bags, warm-up suits, and a selection of team attire. Transportation to away games is via the team’s coach bus! Lodging and two meals on away trips are also provided by the team.

It is our believe that if any conflicts arise, all parties involved want one thing: Whatever is best for the student-athlete.  Because of this reason, we have come up with a few guidelines to follow when addressing a concern:

The time to discuss a concern is not at the heat of the moment, at the ice rink.  Instead, we will deal with all concerns in a timely and professional manner after allowing 24-hour cool down period.

Any contact (verbal/written) concerning players playing time will not be responded to.

Bob is a certified hockey lifer. In 1959 he entered St. John’s Prep in Danvers as a freshman netminder. After playing for two years at St. John’s, he finished his high school career at St. Mary’s in Lynn as a league All-Star. He then attended Providence College and played for the Friars.

In the early 1990s, he joined up with the Boston Junior Terriers of the old Metropolitan Boston Hockey League. That led to gigs with the Eastern Junior Hockey League, the New England College Development League, and the Tyngsboro/Nashua Huskies.

Rotondo started the Northeast Women’s Hockey League (NEWHL). That was the beginning of women’s hockey in the Boston area. This was the only place that women came to play. It had players from junior high and high school coming to play. Rotondo and a few partners started to cobble together NEWHL All-Star teams and began playing in a number of regional tournaments.

While Rotondo immersed himself in the business of running leagues, club teams and hockey rinks, he also was making a name for himself as a goalie instructor. Rotondo established Puckstoppers Goaltending and opened his own synthetic ice training facility.

Rotondo was also one of the founders of the East Coast Wizards. He eventually went out on his own and became the driving force behind the Boston Shamrocks.

The Boston Shamrocks are clearly the apple of Rotondo’s eye. The elite all-female Shamrocks remain his pride and joy. The list of Shamrock alumnae who have gone on to play at over 50 Division 1 and Division 3 colleges is impressive, playing at programs such as Amherst, Boston University, Clarkson, Harvard, Maine, New Hampshire, Notre Dame, Providence, St. Anselm, and Yale, to just name a few.

Asked what he’d like his legacy to be, once he finally walks away from the game, Rotondo thinks for a moment, and then says, “Just that I helped a bunch of kids go to school, and become great women.”